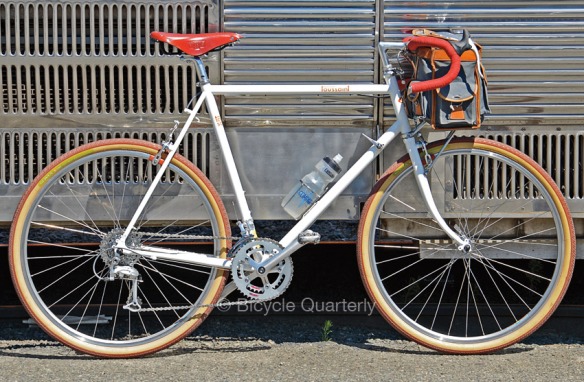 Our Velo Routier frame was recently reviewed in the Bicycle Quarterly’s Autumn 2014 Vol. 13 No.1 issue . The test bicycle was generously provided by our Seattle dealer Free Range Cycles.

I am a subscriber and avid reader of BQ. Jan Heine’s product reviews are not shallow puff pieces but thorough, detailed and thoughtful reports of the good, bad and ugly. There was some trepidation on our part to hear that our frame was to be reviewed and subsequent relief that the review was very positive in general, but you will have buy an issue to get the whole story 🙂

There are a couple of points that came up in the review I would like to add to. Jan noted that our frame was very similar to the first generation Kogswell Porteur/Randonneur. I was aware of the Kogswell bicycle story up here in the Great White North but we did not know any of the details of the bicycle design except snippets gleamed from the internet. Our initial prototypes were designed from several vintage low-trail 650B bicycles and 650B conversion bicycles that I either owned or had access to and from information from various sources including Jan’s highly informative articles in BQ.

Jan noted a few details such rack tabs that were pressed and that front rack sat high on the front wheel. We were trying to create a introductory product that filled the entry level randonneur bicycle niche and as such we made design decisions on construction details such as pressed tabs to keep prices down. As for the high rack, we are working on improvements for the future and are certainly taking that observation into consideration.

Our down tube was deliberately specified with a stouter diameter and wall thickness on our 57cm and 60cm frames. We debated whether we should go lighter but decided to play it safe out of concern for high speed shimmy. The 51 and 54 cm frames have a lighter 0.8-0.5.-0.8 28.6mm diameter downtube and the 54cm moderately planes in my experience. I am a big supporter the concept of planing and designing a low volume production frame with this in mind is still a work in progress.

7 thoughts on “Bicycle Quarterly Review of the Velo Routier Frame”